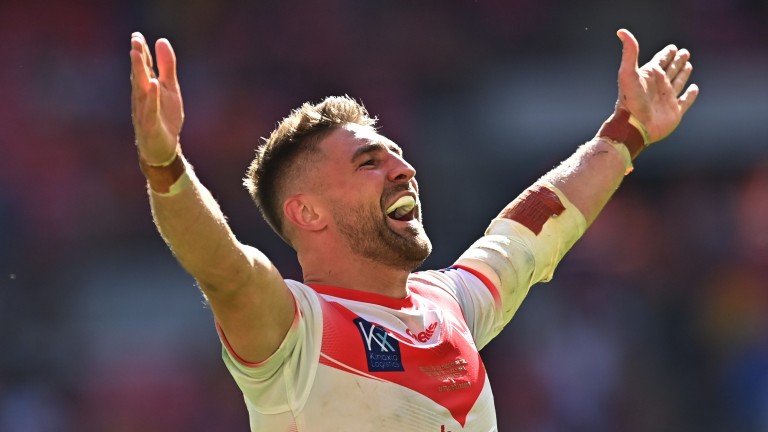 Tommy Makinson has helped himself to 230 points in the Betfred Super League this season and the influential St Helens winger could cap a fine campaign with a match-winning performance at Old Trafford on Saturday evening.

Makinson has bagged 22 tries in 21 appearances this term, alongside 71 goals, and he looks a genuine threat to score the first try in Manchester.

Leeds conceded 150 points more than their Grand Final rivals over the course of the regular season and although they have tightened up in the final weeks of the campaign, nerves could get the better of the Rhinos, who are in their first title decider for five years.

Many of the Rhinos squad have never played in the end-of-season showpiece and they could be vulnerable to a ruthless Saints side who are seasoned performers at this stage of proceedings.

Makinson looks a good bet to pick up the Harry Sunderland Trophy awarded to the man of the match should Saints pile on the points, while livewire playmaker Jack Welsby could also shine on the big stage.

Welsby’s astonishing last-gasp try in the 2020 final at Hull won the title for St Helens that night and his influence on the side is growing ever greater.

Still only 21 years of age, Welsby has shown great maturity since that magical moment two years ago and he is a crucial cog in the champions’ attack.

The Saints number one has registered 27 assists since moving to half-back this season and was on the three-man shortlist for the Man of Steel award which went to Salford’s Brodie Croft.

Welsby joins the play at speed and times his runs to perfection, creating multiple opportunities for others to cross, and Joe Batchelor has been one of the chief beneficiaries in recent weeks.

Batchelor has peaked at the perfect time, bagging three tries in his last two outings, and takes a lot of stopping when close to the line where his side could see plenty of action.

Stefan Ratchford was the last non-Saint to take the man of the match award in 2018 despite his side Warrington losing to Wigan on that occasion.

And Rhyse Martin could follow suit as he looks set to return to the Leeds line-up on Saturday as his skills with the boot could be key to the Rhinos’ chances of causing a shock in Manchester.

If Leeds perform well Martin is likely to be at the heart of matters and he could get due recognition with the man of the match honours.