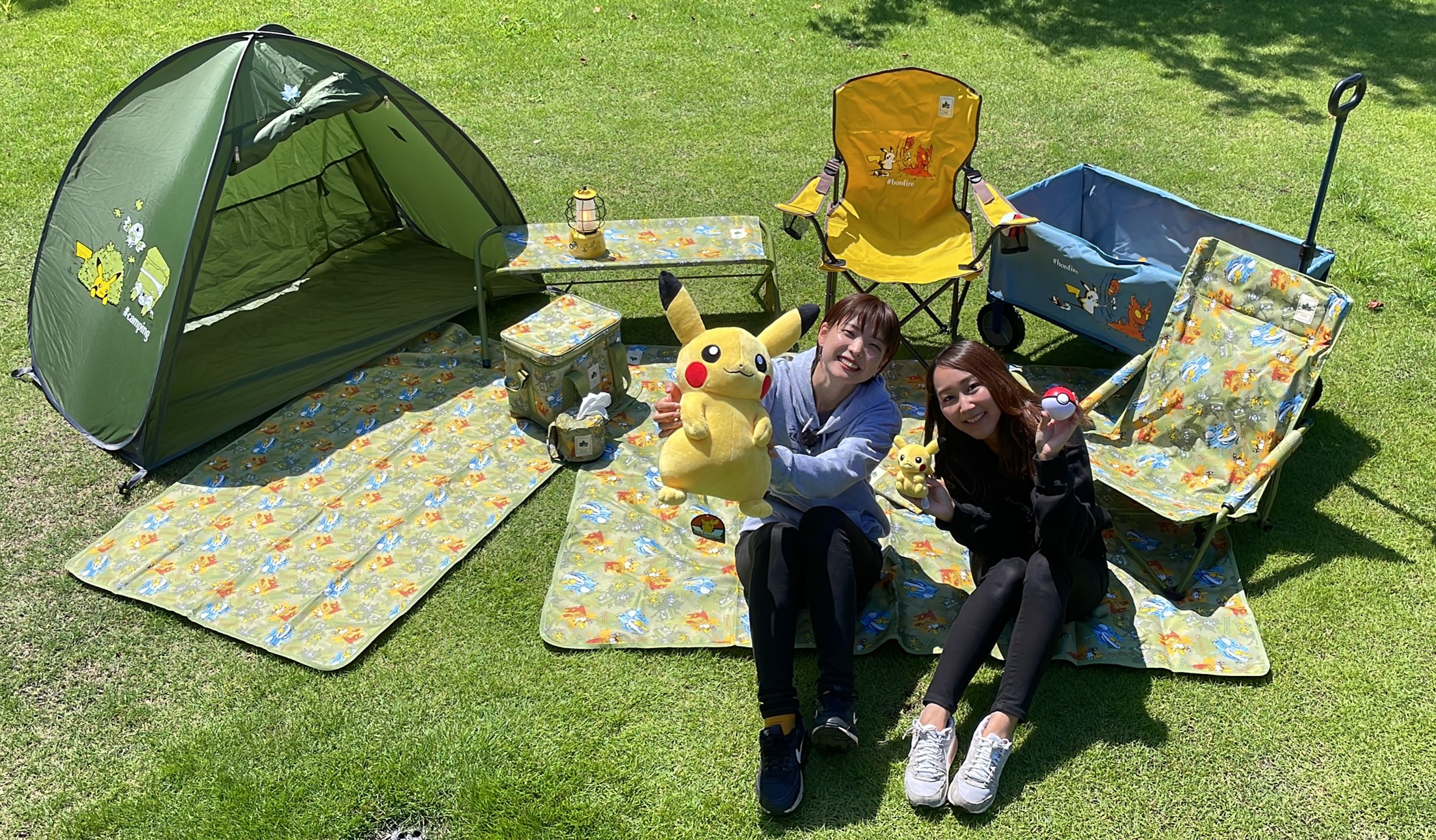 Camp out in style with these outdoor goods sold at Pokémon centers this fall!

Did you play Pokémon Ruby or Sapphire back in the day and really wish you could make your own Secret Base? Well, now you can! The Pokémon Center and outdoor brand Logos have teamed up to produce a line of Pokémon-themed camping and outdoor gear that’s perfect for your hidden hideaway–or just for camping, picnics, during music festivals, or even at home.

The collection contains 20 different items colored with earth tones and decorated with Pokémon enjoying their natural habitats and will be released gradually between September 21 and October 8. The theme is “#pokémonpicnic” and includes items suitable for people of all ages.

The two items coming out first are a rolling cart (24,200 yen [US$167.72]) and a fold-up bench (4,180 yen), which will be available on the Pokémon Center Online Shop starting September 21. The rolling cart is blue, featuring a Pikachu riding cheerfully down a river on a Lotad as a Quagsire watches on one side, and a Pikachu roasting marshmallows over a Slugma while a Skwovet looks on from behind the tree on the other side.

The foldable bench is a forest green color and features three scenes on its pattern: the Pikachu on the river, the marshmallow-roasting Pikachu, and a third illustration of Pikachu diving into a pile of leaves with a Rowlet and a Crustle.

Starting on September 23, you’ll be able to buy the bulk of the #pokémonpicnic line both online and in Pokémon Center stores across Japan, including a foldable table, pop-shade tent, two kinds of camping chairs, a soft-sided cooler, a fold-up sheet, an LED lantern, and a roll holder (for paper towels or wipes). The prices range from 1,640 yen to 10,450 yen.

If you’re not much into camping, you can still take advantage of the portable drinkware and clothing that come with the line, including tumblers with Pikachu eating a berry etched on them, which come in a set of two for 1,320 yen…

…and a stainless steel mug with either the picture of Pikachu riding on the Lotad or diving into the leaves on one side and the berry-eating Pikachu on the other (1,650 yen).

Among the clothing are kid’s sweatshirts in yellow featuring the marshmallow roasting Pikachu (6,600 yen)…

…an adult sweatshirt in black with Pikachu in the pile of leaves (7,700 yen), and a grey hoodie with Pikachu riding on the Lotad (8,800 yen).

Lastly, on October 8, a forest-green leisure sheet with all three illustrations will be released in two sizes: a “pair size” (2,970 yen) and a “picnic size” (4,620 yen), which will be great for camping or picnicking this fall.

You can also buy just about everything on the Pokémon Amazon Store on a slightly delayed schedule, with the exception of the tent and bench, but each item will have limited stock, so you’ll either want to order them right away or count on getting them from the Pokémon Center Online Store or in the physical store.

There are lots of reasons to visit Pokémon Centers anyway, and not least because some are accompanied by a Pokémon Cafe serving delectable seasonal fare, so why not make a trip to the one nearest you this fall to stock up on your Secret Base essentials?